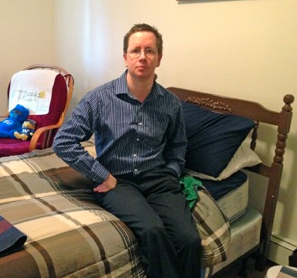 “Asperger’s Syndrome is definitely a struggle at times. It’s made me open to now knowing what’s going on out there, what things do affect me and what social changes and what employment changes, and why I struggled, why I continue to struggle. There’s a reason behind it.”

Description: Chris Powers was born April 24, 1975, in Augusta, ME. He works in the hospitality industry, is a student of history, and a disability rights advocate.

POWERS: I knew something was different for me at an early age, as a kid. I didn’t know what. I mean I spent a lot of time at Boston General and Boston Medical getting tested for–I would say just about everything. And I was sensitive to certain things and the smallest things could be challenging for me. And I knew I was socially awkward; I just didn’t know how socially awkward I was.

NARR: Even as a young child Chris Powers felt different. He wasn’t like his older brother or the kids he went to school with.

POWERS: I was definitely, you know, one of those odd children, and I was very quiet, you know. Going out and hanging out with friends was not something I particularly did. I was drawn to academics by an early age.

NARR: His parents divorced when he was very young, and Chris and his family moved around a lot. He was never at one school for more than a year and a half. They lived in Maine, Illinois, Missouri, and Maine again. When Chris was nine, his mother remarried and he had two step brothers. In a busy household it was easy for his parents to miss the early signs of Asperger’s Syndrome. Small things were a challenge for Chris. He couldn’t seem to stay healthy or fit in with his peers. Dressing and socializing were difficult, too.

POWERS: Even up into high school, I mean I could literally have–I still do–I would walk out and my mother would have to make sure that I had–my clothes were right. I had a unique challenge even today, but it’s not as as bad, where I would say something and not realize what I was saying was offending somebody. And as far as writing goes for me, I knew what I wanted to put down on paper, but I had trouble getting it down, so I wasn’t–my thoughts weren’t always getting down on paper, and that was a challenge for me going through school. And obviously I knew right away math was going to be a huge, huge problem for me, because I just struggled in math my whole life

NARR: Not everything was hard for him, though. Chris has an amazing aptitude for history. His life as a history buff began on a visit to Springfield, Illinois, the home town of Abraham Lincoln.

POWERS: I’m a history buff, I really am, of course my bookshelf is covered with history books–’cause my mother when I was a kid took me to Springfield, Illinois, and that’s when I fell in love with the Civil War. And since then, it’s become an obsession along with a hobby.

NARR: Chris graduated from college and entered the work force, still suffering socially, and still feeling different. Chris was 39 when he was finally diagnosed with Asperger’s Syndrome.

POWERS: Nobody knew of Asperger’s in the ’70’s and ’80’s, you know, where it was even talked about. They knew I had a learning disability. That was–early on they got that, but. And they knew that socially something wasn’t quite right, there, but, you know I don’t know if they knew truly what was going on, because the services really weren’t there back then when I was a kid, they weren’t available. They stuck kids like me in the LD room and said, “That’s it.”

NARR: Hans Asperger first described the syndrome in the 1940’s. Five decades later it was added to the DSM IV, a handbook for mental disabilities. In the mid-2000’s, Asperger’s became more widely know. That’s when Chris and his mom put two and two together.

POWERS: Well, my mother, being the social worker that she was, had started reading up on Asperger’s. And the more she read up on it–she told me–I came home one day, and she said, “Read this. Check off all these things.” and said, “I think you’ve got Asperger’s.” And I was reluctant to get tested because I didn’t want to get labeled, but these social and employment things, and all these things socially, they matched up, almost to a “T.” But, you know, I was resistant, I didn’t want to feel any more awkward than I thought I was, but it took losing a job that I considered to be my dream job–that I said, “OK, I gotta get diagnosed. I gotta find out what’s going on. I just lost the job of a lifetime.”

NARR: He can’t say what the difference would have been, but he knows an early diagnosis would have made a huge impact on his life.

POWERS: I think I might have been able to handle a lot of problems, social issues, the minor issues head on.

NARR: Even though he received his diagnosis in 2006, he’s still unclear on how to define what it’s like to have Asperger’s.

POWERS: You know what? Seven years later I can’t explain it. I always get asked by people, “So what exactly is it,” And I said, “Well, unless you have it, you really can’t explain it.” You know, so probably the best way I can explain to people is that our minds don’t quite work the way we would like them to work ninety-five percent of the time.

NARR: It’s not that Asperger’s is a new phenomenon. It just wasn’t called that when Chris was growing up. In college, Chris studied the Americans With Disabilities Act of 1990. That was a decade before he realized its relevance to him and his rights.

POWERS: I mean, I knew the ADA act because I took some political science classes in college. I’m sure I probably even had to write about it, but if it affected me, I had no idea. I knew more about the Brady Bill, and I knew more about probably other political acts going on rather than the disability movement.

NARR: Chris says there have been both good and bad times. He says the good things are his advocacy work, his involvement in the disability rights movement, and connecting with others who have similar diagnoses. He’s gotten involved with other organizations as an officer in the Masons and the Knights of Columbus. And he got married. But life is still a struggle, and finding employment has been hard.

POWERS: You know, I had a job in Boston, working for a law firm. Great pay, great office. I missed every social communication cue that you could possibly imagine. I missed it. As a result, I lost the job.

NARR: But since his diagnosis in 2006, Chris has been actively involved in the disability rights movement and autism awareness. He serves on the Maine Developmental Disabilities Council. He attends autism conferences throughout the country, and he visited Washington. DC in support of employment rights for the disabled. The diagnosis has come with an acceptance and understanding of his disability. What he feels he lacks in social skills has developed into social consciousness and a desire to advocate for others. Without the diagnosis of Asperger’s Syndrome, his life would be very different.

NARR: Asperger’s means he misses social cues, but amazingly, Chris has a strong social conscience. He sees the whole picture when it comes to autism awareness. He is working hard to make life easier for people with disabilities. Chris calls his life since his diagnosis, “a bumpy road,” but it’s one where he now has directions and knows where he’s headed.

I’m Keith Ludden. This segment of our series on the 25th anniversary of the Americans With Disabilities Act was recorded, written, and produced by Molly Graham. Our series is funded in part by the Maine Humanities Council, in partnership with the Maine Arts Commission, Oral History and Folklife Research, Alpha One Independent Living Center, WMPG, and the Disability Rights Center of Maine.