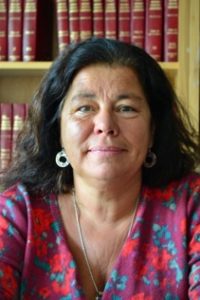 “There was just so much power and hope and dreams and it was just an incredible time of the real heart of a movement. So we had people from all ends of the spectrum–both ends of the spectrum–people that wanted to work with everyone to make sure that we could get everyone on the same page and find consensus and all that, all the way to the other extreme of people that were just so angry that this was taking so long and made so much sense, and how simple is this to do?”

Kim Moody was born in 1962 in Brunswick, ME and attended school in Yarmouth, ME. She graduated from Wheaton College. Moody is a disability rights advocate and serves as the Executive Director of the Disability Rights Center for Maine.

MOODY: It just changed the world. All of the sudden we had our own civil rights act.

NARR: Kim Moody is the Director of the Disability Rights Center of Maine. She has spent much of her professional life advocating for persons with disabilities and enforcing the Americans With Disabilities Act, as well as other pieces of state and federal legislation aimed at curbing discrimination against persons with disabilities. Moody was born without a left hand and a portion of her left arm. She says it wasn’t until the sixth or seventh grade that she became aware of her difference from others. In the eighth grade, she ran for class president–and won.

MOODY: The real astounding difference for me in my life was when I went away to college, because that was when it was clear that there were people that were very uncomfortable with disability. It wasn’t until I got to college that I saw myself as really different from other people, in that I saw that other people saw me as really different from them, and not as good as. I was on the tennis team at Wheaton College and I was a good tennis player when I left the state of Maine and I played regularly at Wheaton with the number one, two and three on the team. We played at night and on the weekends because we were all addicted to the sport, and I was of equal playing level to them. And the coach at the Wheaton College tennis team made me the ball girl, essentially; she wanted to make me the manager of the team.

NARR: It was a big shock to be around students who drove BMW’s.

MOODY: They were uncomfortable with my disability. They would stare and they would talk and there were the really snobby girls–that’s a terrible thing to say, but it’s true–who really were awkward around me.

NARR: Moody’s own approach to her disability has changed over the years.

MOODY: I wore an artificial arm from the time I was a year and a half to the time I was–or I turned thirty, my first child was born. And I had always worn this prosthetic device and would not go out of the house without it–never wore–I guess it’s vanity–never wore strapless anything because I never wanted the straps to show–as if people couldn’t see this great big artificial arm. It’s something that over twenty years of growing up with this thing. And then when I strapped it back on to leave the hospital with my brand new baby, and went to pick him up out of the bassinet, and realized, “Ah! I don’t want this thing on!” Because it was it was just not–it’s a stainless steel hook. And so I took it off, put it in my bag, and really have never really worn it again except for biking or playing tennis or doing skiing.

NARR: Moody graduated from college in 1984 and began working for the Disability Rights Center of Maine in 1987, three years before the Americans with Disabilities Act was signed.

MOODY: Because we were mad. How could this be happening? How could the House pass this and the Senate not let–and let it languish. There was just so much power and hope and dreams and it was just an incredible time of the real heart of a movement. So we had people from all ends of the spectrum–both ends of the spectrum–people that wanted to work with everyone to make sure that we could get everyone on the same page and find consensus and all that, all the way to the other extreme of people that were just so angry that this was taking so long and made so much sense, and how simple is this to do?

NARR: She says there was a feeling of empowerment that twenty-five years later, the disability community is trying to revive.

MOODY: The feeling was, “I am no longer ever going to be considered less than–in fact I think I might be better than you because I have a disability.” I mean there really was some of that going on, I think.

NARR: And she gives the ADA credit for enormous changes.

MOODY: I think it is a completely different world from what it was pre-ADA. If you think about it from an advocacy perspective, we didn’t have many laws to protect peoples rights.

NARR: But there is still a long road ahead. While Portland and South Portland have instituted busses with lifts, for much of the state, transportation for persons with disabilities is still a major issue.

NARR: And some things will take more than legislation to change.
MOODY: Discrimination and stigma are rampant. A law cannot change that. We can file a lawsuit using this law, and then we can get press around that, and then we get the press to cover that case in the right way, there will be some sympathy for that plaintiff. Or, people will read that story and based on the comments that they write after that story, they may think, “Why does that person think they should have special rights because they have a disability?” So there’s some backlash, too, I think.

MOODY: With the passage of the ADA, all of the sudden, advocates and lawyers had stick, so that we no longer had to just beg and plead for people to do the right thing.

NARR: I’m Keith Ludden. Our series on the twenty-fifth anniversary of the Americans With Disabilities Act is funded in part by the Maine Humanities Council, In partnership with the Maine Arts Commission, Oral History and Folklife Research, Alpha One Independent Living Center, WMPG, and the Disability Rights Center of Maine.