You are here: Home / The Last Sardine Cannery / Myrtress Harrington 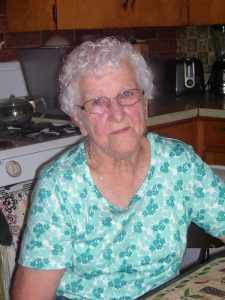 Yes, I remember my mother. She would come home sometimes in the middle of the night and sometimes they would come home early. They wouldn’t know. If they had one boat in, it wouldn’t take that long. I remember her getting up and going. Putting her apron on and her hat, getting her lunch ready the night before. But in the old factory there was a couple that would come over like if we worked after—Six O’clock was our supper hour at night, in the old factory. And there was a couple would bring like hot soup and stuff, we’d buy it. It was good. She’d have pies and everything. Wasn’t too bad. And today I wouldn’t want to do it caused they’d probably charge for it. Then you could buy a piece of pie for fifty cents, in them days. Now what is it, three dollars?